It’s no secret that football is one of the most popular sports – if not THE most popular – in the United States. After piquing the interest of other countries, the sport made its way across the pond when the NFL started the International Series in London in 2007. Ever since, we’ve watched as fans in the United Kingdom have increased, drawing in even more of a demand for football (not futbol!).

In 2014, the NFL is making history and giving these fans more to cheer about – three International Games!

This fall six teams will make their way to Wembley Stadium in London, England to compete. Four of these teams having never competed in an International Game before. The game schedule is as follows:

This will be the first year that Dallas, Detroit, Atlanta and Oakland have ever competed in an International Series competition. Miami and Jacksonville will both be returning to Wembley after having lost their contests in previous years, with the hopes of a better outcome.

According to the NFL, the International Series currently has a fan base of about 12 million people – 2.5 million of which are avid football fans. This is 30 percent increase from 2012. That’s a lot of football fans!

To put into perspective how big the NFL has become in the UK, when the Minnesota Vikings took on the Pittsburgh Steelers in London last September, there were 83,518 fans in the stands. In comparison, 71,024 people attended Super Bowl XLVII when the Baltimore Ravens beat the San Francisco 49ers!

And if you think the NFL is going to stop making history after adding a third International Game, think again! They’re looking to continue growing the series and they’re also having the first ever morning game!

When the Falcons and the Lions compete at Wembley Stadium on Oct. 26, their kick-off time with be at 1:30 p.m., London-time! This means the game will be starting at 9:30 a.m. ET, and 6:30 a.m. PT. The League believes this will be a better way to reach football fans globally.

Go to the NFL International Series in London

Considered one of the most diverse and cultural cities around the world, London has a lot to offer. From sites such as Big Ben and Parliament, Westminster Abbey, Buckingham Palace, Tower of London, Piccadilly Circus and Leicester Square, London is the perfect combination of history and the modern world.

When you combine this trip of a lifetime with the opportunity to experience your favorite sport on a brand new turf with unknown elements, it’s an experience like no other!

With QuintEvents Official 2014 International Series Ticket Packages you can have the NFL experience of a lifetime, with exclusive access to a hospitality venue during the game filled with other fans and team celebrities.

Not to mention, you’ll be invited to NFL On Location’s Friday Night Event and the official pre-game tailgate at Wembley Stadium.

With accommodations and transportation also included, you’ll be able to sit back and enjoy the beauty of this breathtaking city, while experiencing NFL history being made!

Get more information on how you can attend the NFL International Series games in London, England and plan your experience of a lifetime today! 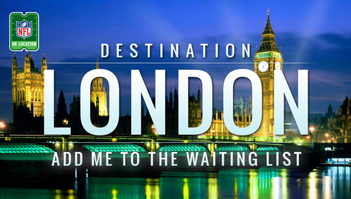